The Cavalier King Charles Spaniel is a relatively young and new spaniel breed when compared to others.

It is a small ‘comforter’ dog associated with lap dog status and a pleasant life indoors, but the  ‘lapdog’ status is inaccurate and they can be capable workers and able to take on spaniel training due to their spaniel heritage.

This is a cheerful, little dog with a tail that never seems to stop wagging and a passion for lives with their owners.

History of the breed

This breed of spaniels was ‘born’ in 1928 two years after a challenge was set at Crufts in 1926 to see ‘spaniels of the old type as seen in pictures of Charles II time’.

Mr. Roswell Eldridge of New York set the challenge, offering the sum of £25.00 in two classes at the famous dog show for dogs that looked like those pictured.

Cavalier King Charles spaniels are, like most of the spaniel breeds, sociable and friendly dogs. They enjoy human company and should not be left on their own for long periods.

Like the other spaniel breeds, the Cavalier will shed his hair, particularly in springtime when the weather begins to improve. Thankfully he is a small dog and regular grooming is easy and quick to do.

In the same way that the other spaniels, he might try to chase game and birds when you take him out. This is because of his spaniel blood and is instinctive.

Cavaliers can bark and be a bit yappy at times, mainly when disturbed unexpectedly, but they are very friendly dogs and rarely become vicious.

The breed are not outdoor dogs and are more ‘comforter’ type dogs, they should live inside.

The Cavalier King Charles has a long, silky coat that is normally free from curls, being wavy with feathering on his legs, ears and tail.

He is the smallest spaniel breed but is a sturdy and strong little dog, he should not be tiny, like a toy breed and you should avoid overly small versions as it is likely that they will be from bloodlines that have suffered poor breeding practices. 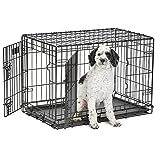 They are not the same breeds.

The Cavalier’s origins are in the King Charles which is the ancient, traditional spaniel breed.

There are four varieties of the King Charles spaniel which are divided into separate colours, all of which have descended from the same source.

This breed is named after Charles II who, with his brother James II, made the breed popular, but it is known that the breed existed for a good time before then and it is thought to have originated in Asia.

In the USA, this breed became known as the English Toy Spaniel.

The Cavalier will weigh between 5.9 and 8.2 kgs and measure 30 to 33 cm at the highest point of the shoulders.

Cavaliers are as happy to go on long walks as they are to lie around in front of the fire. A reasonable daily walk is good for them.

Not difficult. A regular brush will help to keep the coat free of tangles and in great looking condition.

Features of the King Charles

This spaniel weighs anywhere between 8 to 14 pounds and the breed is not as sturdy as the Cavalier.

Blenheim – White with chestnut red patches and wide white blazes with a red spot on the forehead.

The Cavalier shares many of the traits and behaviours of the other spaniel breeds.

It is a lively, loveable little dog that nowadays enjoys a life of luxury and all of the perks and treats that that includes, yet, when given the chance, still has the ability and drive to enjoy the great outdoors with the same energy levels as many of it’s larger spaniel cousins.