Find out how big your Cocker spaniel will grow

Typically a Cocker spaniel will weigh anything between 14 to 20 kilograms and will be anywhere from 12 to 16 inches tall at the shoulder. Working Cocker spaniels tend to be smaller and more compact than show Cockers. In both the females are normally smaller but, this is not always the case.

How big do Cocker spaniels get?

In the UK as well as the USA and other countries, the Cocker spaniel is recognised as falling into two breeds – the American Cocker and the English Cocker.

The breed ‘split’ many years ago and nowadays there are visible differences between the two types of dogs with the English Cocker spaniel being more similar to the American Boykin spaniel in terms of size, colouring and features.

Confused? Yes, it varies, dogs of the same or similar breeding come in different shapes and sizes – just like people.

But to make it simple – English Cockers are bigger than American Cockers…..normally.

How big do working English Cocker spaniels get?

I have two male English Cocker spaniels that are both working bred dogs, both are fully grown.

My eldest dog, aged eight, weighs 20Kg and is similar in size, stature and appearance to a small English Springer spaniel.

My other dog, aged 3 years, is smaller, weighing 14Kgs, much finer with slimmer features and shoulders that are not as broad as the elder dog.

I have seen working English Cocker spaniels in a variety of sizes and, from my dogs, I would say that they are on the fringes of normal working Cocker spaniel sizes. 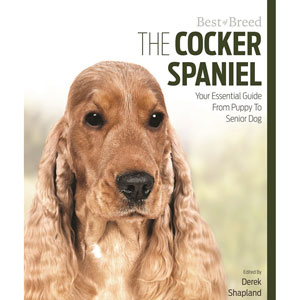 What age is a Cocker spaniel fully grown?

Most dogs, Cocker spaniels included are fully grown by the time they are around 12 to 18 months old.

Dogs grow very quickly which is a natural, genetic trait based around survival needs, and the domestic dog is often mature by the time he/she has reached 18 months of age.

Smaller breeds mature more quickly than large dogs but, on average a Cocker spaniel is fully grown anytime up to 18 months old.

Not normally. Show Cockers are bred for appearance and for conformity to ‘breed standards’ and are generally larger than working dogs.

If you compare a fully grown show Cocker and a working Cocker, then you could struggle to recognise them as the same breed.

Show spaniels ( of all breeds ) are normally taller than working spaniels and have much more exaggerated features, such as long ears, longer snouts and much longer hair.

Working spaniels, which includes Cockers, by contrast are more compact, smaller and often powerful than their counterparts.

Cocker spaniels will vary in size depending on their sex, type of Cocker and whether they are show or working bred dogs.

Is a Cocker spaniel a small or medium dog?

Cocker spaniels, of all types are medium sized dogs.

They make great pets, are wonderful family companions and are friendly, intelligent dogs that enjoy playing games and being with their humans.

If you are looking for a small spaniel breed, then an excellent choice would be the Cavalier King Charles spaniel that has all of the personality of a spaniel but which is a fraction of the size of a Cocker.

Cocker spaniels come in a variety of size depending on the ‘type’ of Cocker spaniel that they are and whether they are working or show bred dogs.

They are considered to be medium sized dogs but, as with most dogs, the size of a Cocker can vary based on his parentage and family history.

Previous post : Why do dogs bark when there is nothing there?
Next post : Can dogs eat Yorkshire pudding?