Is it OK to play tug of war with a puppy?

Is it OK to play tug of war with a puppy?

That is a question that many dog owners wrestle with.

On one hand, playing tug of war is a great way to engage your pup and provide them with exercise.

On the other hand, there is a risk that playing tug of war can lead to dominance disputes and aggression problems down the road.

So, what’s the verdict?

Tug of war can be a great game to play with a puppy. It can help you to bond with your young dog, is great fun and can help to tire out an active and energetic pup. To get the best from this activity there are some basic dos and don’ts that you’ll need to be familiar with.

Tug of can be fun and is okay for most dogs

Dogs love to tug and play.

Tug of war can be a great game for you to play with your puppy. It helps puppies learn bite inhibition – how hard they can mouth and bite without hurting their human family members or other dogs.

Playing tug also provides important mental stimulation for your puppy as well as physical exercise – a win-win all round.

Although tug of war is a great game there are a few things that you should think about before you play this game with your dog.

Aggression– If your dog is aggressive or has displayed any tendencies towards aggressive behaviour, regardless of where and when, then you should avoid playing possession based games such as tug of war.

This type of competitive game could worsen your dog’s behaviour and even result in bites and other consequences.

Teeth – If you play tug of war with a puppy then this should only ever be a very gentle game.

Puppies are still growing and their teeth, mouths and jaws could be damaged or affected by over zealous playing of tug of war.

Likewise if your older dog has dental problems then this type of game should be gentle or avoided altogether.

Benefits of playing tug of war with a puppy

Providing that you are sensible then playing this game can help your puppy to:

Develop his confidence and overcome shyness

Help him to learn to play with his toys

Distract him from chewing and nipping

Use up his excess physical and mental energy

Learn that his human family are fun and like to play

Rules for playing tug of war with a puppy

Here are some basic rules for playing tug of war with your puppy:

Don’t be too keen – take it easy, particularly with puppies and older dogs.

You don’t want to hurt your pet or cause injury so be gentle with the game.

Rope type toys are best for playing tug of war.

They are tough, easy for you and your pet to hold and they are long enough so that your hands don’t get close to your dog’s teeth.

Never let the dog start the game. You should be the one that ‘gets the ball rolling’.

In the same manner you decide when the game has finished and put the toy away at the end.

Avoid letting children play tug of war with the dog. Children can easily become over excited and this can result in an overexcited dog.

Dogs can become injured from over zealous, aggressive kids and, likewise, children can be injured by competitive dogs.

Children are also less likely to understand the dog’s body language which could become problematic.

Always end the game if your dog’s teeth touch you – even if it was accidental.

Your dog should never be ‘rewarded’ when his teeth touch a human and he needs to understand that teeth coming into contact with people is never acceptable – even if it were an accident.

If your dog becomes aggressive then end the game.

This could be displayed by hackles up, tail up. excessive growling, baring of teeth, ears back etc.

If you think that you might be bitten then drop the toy and move away, ending the game.

How long should you play tug of war for?

A good rule of thumb is to play tug for five minutes then have a five-minute rest.

This will help your dog to stay calm and not become too excited. Remember, you want your dog to be happy and relaxed not overexcited or aggressive.

Most puppies that are well socialized will have no problem playing tug of war with their human family members.

However, there is a small risk that if the game isn’t played correctly, or if it’s played with an aggressive puppy, then the game could make the puppy more aggressive.

To avoid this problem you should:

Only play tug of war with puppies that are well socialized 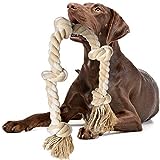 If you follow these simple guidelines then playing tug of war with your puppy can be a fun and beneficial game for both of you.

Just remember to take it easy, be gentle and keep an eye on your pup’s body language. If in doubt, ask your vet or a qualified dog trainer for advice.

Final words on playing tug of war with a puppy

Playing tug of war with a puppy can be a fun and beneficial game for both of you – just remember to take it easy, be gentle and keep an eye on your pup’s body language.

Always control the game and be ready to end it if your puppy becomes too excited or aggressive.

If in doubt, ask your vet or a qualified dog trainer for advice.

How to groom your puppy at home easily

Can I walk my dog with kennel cough?

How to tire out a puppy before vaccinations