What is a Clumber Spaniel?

Originally, the Clumber Spaniel was bred for hunting and retrieving game for the gun.

The Clumber Spaniel, as it is recognised and known today, originates in England and is named after Clumber Park in Nottinghamshire an area where the breed was developed into the dog that is known today. It is the largest spaniel breed that was bred to hunt thick and dense cover.

Like most of the spaniel breeds, however, the true heritage of the Clumber Spaniel is not fully known, it is thought that it may be a descendant of French dogs and is normally a white dog with either lemon or orange markings.

The working Clumber Spaniel is a strong, low slung dog that specialises in hunting through thick and dense cover.

For many years the Clumber Spaniel has suffered from questionable breeding practices to suit the show ring and good working bred dogs are difficult to locate.

The breed is considered to be an ‘at risk’ breed in the United Kingdom, which means that there are less than 300 registrations annually at the UK Kennel Club.

Clumber Spaniels, like all of the other spaniel breeds are lovable dogs that enjoy and thrive in a family environment.

This spaniel breed with live happily alongside other dogs and pets, but it is recommended that introductions are made early in the dog’s life so as to minimise the risk of any potential problems.

As a historic working breed the Clumber enjoys work and play and they are quite a ‘laid back’ dog with few tendencies to being aggressive.

Clumber Spaniels make ideal companions as they love being around people and, although they can live outside, with their owners is the place that they enjoy the most. 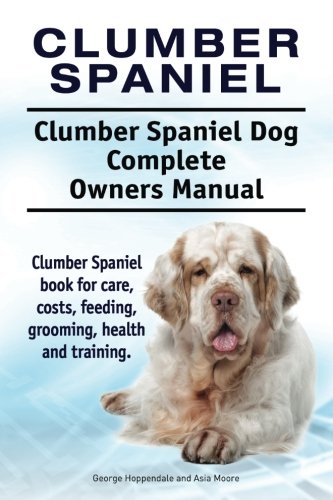 Are Clumber Spaniels Easy to Train?

Clumber spaniels are easy to train although they can, when they wish, be prone to being stubborn and developing a mind of their own.

As a working dog, the Clumber has the necessary traits to enable it to be a good, trainable dog, however the use of the breed in working conditions has diminished over the years, resulting in a dog that may not perform to the best of it’s ability.

As a pure shooting and working dog, the Clumber spaniel, in it’s present guise. may be disappointing when compared to working Cockers or English Springers.

A trained Clumber will make a decent shooting dog for the hunter that wishes to go along at a steady pace as opposed to the sprint that a more popular spaniel may operate at.

There are breeders that are working to restore the Clumber to an effective working breed, and this work continues but will take time to accomplish.

Having said this, the Clumber is a reasonably easy dog to train.

The Clumber Spaniel has a double coat that comprises a dense inner coat and a weather resistant outer.

Generally a Clumber will be a combination of three colours – white, orange and lemon/yellow colour.  Often the coat will be mainly white with flecks and areas of orange/yellow.

The coat is classic spaniel, with feathering on chest and legs, and can be straight or wavy.

Clumbers make excellent pets, their personality is gentle and mild mannered and they rarely display aggression.

As a pet the Clumber Spaniel enjoys his creature comforts and he will spend a lot of his time lying around. sleeping and generally conserving his energy – he can be a couch potato, just like most humans..

Take him out for a walk though and he becomes a different creature and, typical of most spaniels, loves to chase his nose, finding scent and crashing through bushes and cover.

The Clumber enjoys sitting on his owner’s knee, he slobbers ( a lot ), he has a tendency to break wind frequently, he needs regular grooming and he can be stubborn.

Should I Get a Clumber Spaniel?

Truly a matter of personal choice and need.

For a shooting or hunting dog I’d be tempted to go for one of the more ‘established’ working spaniel breeds, but, if you want a shooting dog that plods rather than gallops, then, if you can find a well bred working Clumber, then it is certainly an an option for you.

If I were thinking about buying a Clumber Spaniel then, as well as the point mentioned above, I would think about a few other things.

Will he get on with my other spaniels? Well the answer to this is yes, Clumbers are sociable dogs that enjoy the company of other pets.

Does he enjoy exercise? I have other dogs that love to be out and about and can he keep up?

Yes, is the short answer. Clumbers, although large and heavy spaniels enjoy the thrill of the chase and the hunt (just like other spaniels) and, although they may not be as fast, they can keep going all day long.

Does a Clumber like training?  On this point the Clumber can be stubborn, but get him on a good day and he’ll do well.

Grooming. Clumbers have thick coats that can shed, but this is true of other spaniels. A careful and regular grooming regime will soon deal with this.

All dogs salivate and slobber, it’s just that Clumbers are the gold medal winners in this area.

Combined with their desire to sit on your knee and show affection by licking, you’ll need to be a doggy person to be able to deal with this.

Health. Sadly Clumber Spaniels have suffered at the hands of show breeders who have bred for looks rather than health and there can be several heriditary problems associated with the breed.

Clumbers can suffer from eye problems and hip dysplasia. Seeking out a responsible breeder would be a priority for me if I were seeking a Clumber Spaniel -although I would adopt this policy with any breed of dog that I was looking to get.

Finding a puppy. Locating a good Clumber Spaniel puppy may not be easy.

In the UK the breed is classed as endangered by the UK Kennel Club and a similar situation exists with the United States. A puppy will be expensive and the better bred ones will fetch a premium price.

So, would I get a Clumber Spaniel – the answer is yes. I would buy a Clumber Spaniel, I would seek to train a Clumber along the lines of other working spaniels to help to return the breed to it’s shooting and hunting roots and abilities.

Choose Carefully and Take Your Time

No matter what breed of dog you are thinking of getting, whether a Clumber Spaniel or another breed, you should take your time and find out about the breed as much as you can.

Speak to your vet about the breed, ask them if they know any breeders or anyone that may know.

Developing and using your network when looking for a dog would be my first choice for finding a puppy, if you can get a recommendation or referral then you can avoid lots of potential problems with breeders.

Contact breed societies and ask them if they know of any breeders that they would recommend.

Keep your eyes open, you may see someone with a Clumber and it’s always worth having a chat to find out about the dog, where they got him from etc.

As with all things a little bit of time spent before making a decisions can reap rewards in the long term.

Clumbers are great dogs and a Clumber spaniel would make a fantastic pet as well as working dog.

They are a relaxed yet active breed of spaniel who enjoy their time outdoors as much as they enjoy lying in front of the fire on a miserable winter’s day.

Previous post : Best Organic Dog Food for Gundogs
Next post : How To Get A Spaniel To Come Back To The Whistle