How to House Train a Cocker Spaniel Puppy

Whether you decide to house your Cocker Spaniel puppy in a kennel or in your home, one thing that will be required is the matter of housetraining.

For many puppy owners, the concept of how to house train a Cocker Spaniel puppy is fraught with problems and disasters. However, with a bit of thought, logic and careful consideration the act of teaching a puppy to ‘go’ outside us easy.

Before we begin – forget all of the old wives tales of ‘rubbing the puppy’s nose in any mess that he makes’…smacking, punishment, yelling, applying ‘things’ to the puppy when he has an accident etc etc.

Anyone that advises you to do this is an idiot ( even if they claim to be a dog trainer ), and you should avoid them like the plague.

Think about it – what will a puppy learn if you shove excrement up his nose after he has had an accident?

Or do you think that smacking him when he makes puddles on your expensive carpet will prevent him from doing it again? Would you smack a human baby?

Anyone who does this ( or similar) or advises that this is the way to house train a Cocker Spaniel has no understanding of dogs or their thought processes and I’ll reiterate – ignore them they don’t know what they are talking about.

Making puddles is one of the most basic of instincts that a dog has.

By doing so a puppy leaves his scent, on items, in areas, on your carpets.

By leaving his scent your Cocker Spaniel puppy is marking his territory.

If you have ever watched dogs when they are out you will have seen this in action, if not then next time you go to an area where there are dogs, watch carefully and you’ll see it in action.

A male dog cocks his leg and marks a bush, lamppost, sign, car wheel etc….if there is another male then he’ll come along, have a quick sniff, then he’ll likely cover the scent of the first dog with his own, by cocking his leg and marking it himself.

And the cycle goes on and on and on.

Take your puppy outside at regular intervals and always:

When he wakes up

After he has eaten

And when he starts wandering around sniffing

In your house, your puppy will be tempted to mark his turf just as he does outside.

If he has previously had an accident indoors,then, chances are, he’ll re-mark the area thus ‘refreshing’ his scent.

When your puppy first enters your home it will smell of many different things.

As humans we don’t really notice as our sense of smell is nowhere near as developed as that of a dog’s, which is incredibly powerful and capable.

Many of our household smells will be undetectable to us but, for the puppy, they will be evident, possibly unpleasant, and certainly strange and unrecognisable to him.

This is why many dogs, even older, house trained animals, will enter a stranger’s home and, to the horror of the dog owner, make a puddle.

To gain some security the puppy will probably add his smell.

The uncertainty, unfamiliar environment, strange people and smells, can all unsettle the best behaved of dogs which can result in ‘accidents’.

We have to learn to think like our dogs and understand what makes them tick.

How To Housetrain Your Cocker Spaniel

I recently read an article online that was titled ‘how to house train a cocker spaniel puppy‘ – it bordered on the ridiculous and is clearly aimed at lazy people.

This article recommends that you keep your spaniel on a leash while it is in the house to stop it from ‘eliminating’ indoors.

Now, I’m not certain what the author was trying to suggest but I very much doubt that keeping your dog on a lead while inside is going to make any difference whatsoever.

It goes onto say that if you cannot supervise your dog then you should put it in a crate and continue to do this until it learns to use the outdoor toilet spot.

If you do adopt the ‘crate’ suggestion for housetraining then, in reality, all that will happen is that your puppy will end up bursting and, as soon as you let him out of his ‘prison’ he will pee on the house floor.

If you are going to housetrain then it’s going to take some effort on your part.

So, don’t be idle and do it properly.

Dog crates should be used for beds

If you see ‘advice’ that tells you to stick your puppy in a crate to stop him from going to the toilet then ignore it.

That advice is for lazy people who cannot be bothered to pay any attention to the needs of their puppy and, keeping a dog locked in a crate to stop him going to the toilet is, frankly cruel.

Dog crates are for security or for a bed. They are not for housetraining and will teach your pup nothing.

If you don’t believe me then be honest with the answers to these questions.

Will locking your dog in a crate stop the dog from peeing in the house?

Does keeping him locked in a crate teach him to pee outside?

What happens when you let out of his prison..I mean crate? Has he learned anything at all?

This is no way to try and housetrain a baby dog and here you will learn the proper way of doing it.

Crates are fine for a dog’s bed or house but, as for toilet training?

Anyone that tells you to use a crate for housetraining has no idea – they should get a cat – and you should avoid them as being any source of advice for puppy or dog care.

Just in case you haven’t got it.

Dog crates have no place in housetraining. Anyone that claims otherwise should get a cat instead.

Firstly,  remember that you are the human and to the puppy it doesn’t matter where he goes to the toilet.

The reason we want him to go outside is because we have carpets, furniture and don’t want mess inside the house – so, in reality it’s our problem – not the dog’s.

Now, there will be accidents, so, get yourself some cloths and carpet cleaner and understand that this is a process that will not happen overnight, and some puppies get it sooner than others.

As with all aspects of dog training, we aim to prevent problems and, as the intelligent human, we should aim to be vigilant and take responsibility.

If the puppy makes a mess then, it’s our fault.

Firstly, think about when you need the toilet….and apply this to your Cocker Spaniel puppy.

So, when your puppy wakes up, either in the morning or when he has slept during the day, he is going to need to goto the toilet.

Take him outside, into the garden or yard and let him scamper around until he ‘goes’.

Helping the puppy to learn

Encourage him by saying something such as ‘be quick’ and he’ll soon associate these words with the act of going to the toilet.

Similarly, after he has eaten, the pressure of his food will press on his bowels and, chances are, he’ll need the toilet – take him out.

If he has had a massive drink then he may need to go….be vigilant and think.

If your puppy does have an accident inside the house then you should take him outside and let him scamper about for a few minutes, using the ‘be quick’ command.

Chances are that. as he’s already relieved himself inside, that he won’t need to do anything, but we are trying to plant an association in his mind that he ‘goes to the toilet’ outside.

If your puppy has an accident while indoors then you should clean the mess as thoroughly as possible. 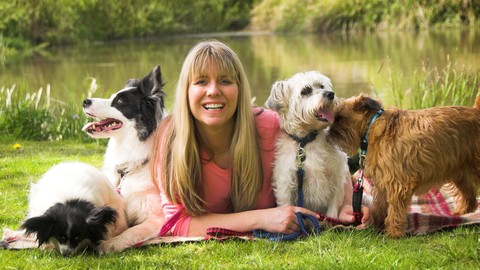 Recognising when your puppy needs to go

With vigilance, very soon, you will recognise the signs that your puppy displays when he needs to go to the toilet.

Your puppy will get up and will begin to wander around the room in a restless manner, probably with his nose to the floor.

As soon as he begins to do this you should encourage him outside and, if necessary, gently take him by the scruff of his neck, or pick him up, and take him outside quietly and without fuss.

Once outside you should let him wander around until he has taken care of things and, as sson as he does make a great fuss of him.

As it is with all aspects of spaniel training, when we think about how to house train a Cocker Spaniel puppy, we always focus on the positive, so, when your puppy goes to the toilet outside we give him ‘exaggerated praise’ for doing a ‘good job’.

Repeat this and repeat it and repeat it and, within a short period of time your Cocker Spaniel puppy will indicate his needs by going to the door, whining or scratching at the door to go out.

Once he has reached this stage you are almost ‘home and dry’.

Housetraining a puppy is not difficult, it just takes a little time, effort and patience.

Some puppies get the idea sooner than others and you’ll need to take care to help the puppy to learn what you need him to do.

If the puppy has an accident indoors then, in reality, that is your fault not the dog’s.

Be consistent, be alert and use your initiative and your puppy will soon be house trained.

The 5 steps to dog training success

How do you keep your house clean with dogs?